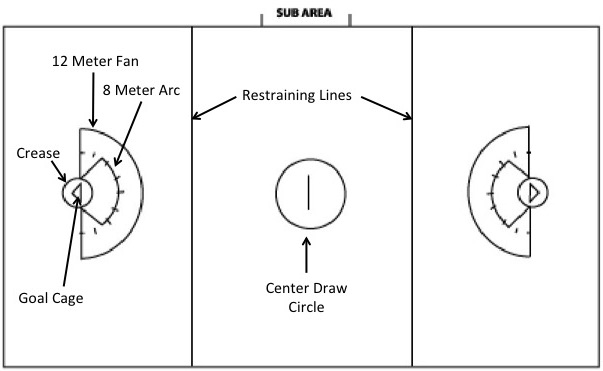 The Field:  The Goal Cage is 6’ by 6’. The circle around the goal is 8.5’ in diameter and is called the Crease. Field players must treat this line as a cylinder and cannot break the plane of this cylinder with their bodies or sticks. The goalie is allowed to cover the ball when the ball is inside the crease. If the goalie leaves the crease with the ball in her stick, she may not step back in while still in possession. If the goalie leaves the crease a field player may go into the crease and take her place if her team is in possession of the ball. This deputy (the unpadded field player’s new name in goal) is not allowed to block shots.

The other lines around the goal are known as the 12-Meter Fan and the 8-Meter Arc. The Center Circle is used for the draw, which happens after every goal and is done in a standing position with the ball placed between the backside of the two players’ sticks.

Restraining Lines are lines at either end of the field that are used to control the number of players on offense or defense at any one time.  See Players and Positions for more information.

Players and Positions:  There are 11 field players plus a goalie for each team. The lines on either side of the centerline are called restraining lines. Only seven field players from each team are allowed into the offensive side of their restraining line. This prevents congestion in front of the goal. Four "attack" players, have roles that are primarily offensive; shooting on goal and feeding cutters. They will typically stay behind their opponents restraining line. Three mid-field players, "middies," are counted on to play equal parts offense and defense and they run the length of the field. Four "defense" players are defensive specialists. They tend to stay behind the restraining line when the ball is on offense.  Four players (plus the goalie) must remain on the offensive or defensive side of the restraining line at all times thereby limiting the number of attackers or defenders.  If those players cross the line, they are considered offsides and a penalty is given.

Equipment:  The ball is slightly smaller than a tennis ball and made of dense rubber. Sticks are between 35-1/2” to 43-1/4” long. The pocket is considered legal if the top of the ball is even with or above the sidewalls of the stick head when dropped into the pocket and slight pressure is applied. Mouth guards and eye protection are mandatory. Goalies wear a helmet with throat guard, gloves, and chest protector. (Many elect to wear additional protection).

Evolution of Women's Lacrosse Rules:  The women's lacrosse game has been modified significantly over the past ten years.  Modifications include limiting the amount of players allowed between the two restraining lines on the draw to five players per team. Stick modifications have lead to offset heads, which allow the women's game to move faster and makes stick moves and tricks easier. In 2002, goggles became mandatory equipment in the United States (but not a requirement in international rules). In 2006, hard boundaries were adopted.

Women's vs Men's Rules:  The rules of women's lacrosse differ significantly from men's lacrosse and are specifically designed to allow less physical contact between players. As a result of the lack of contact, the only protective equipment required is eyewear and a mouthguard. Although these are the only protective equipment, there are still many injuries due to accidental checks to the head. The pockets of women's sticks are shallower than those of the men, making the ball harder to catch and more difficult to shoot at high speed.  Checking is different from men's lacrosse.  See the detailed description below for more information.  Finally, In women's lacrosse, players are not allowed to touch the ball with their body or cover the ball with their stick in order to scoop it into their stick or protect the ball from picked up by an opponent.

Stick Skills:  Learning basic stick skills at the earliest ages is essential.  Girls sticks have a shallow pocket, so for the ball to stay in the stick, players must master cradling the ball, ground ball pick up, passing and catching accurately:

Length of Game:  Women's games are played in two 25-minute halves. These 25 minutes are running time, except for after a goal is scored and on any whistle within the last two minutes of each half. While the whistle is blown, players are not allowed to move.  In high school and middle school:  If a team has a four-goal advantage the clock will run after goals.

Center Draw:  The draw takes place at midfield to start each half and after every goal. The draw is a chance to gain possession.  View video link.  The ball must go higher than the midfielder’s head or else there is a redraw. Besides the players conducting the draw, 4 players from either team may stand on the edge of the circle. The other players must be behind their respective restraining lines. Players may move before the whistle but must remain outside the circle or behind the restraining line. A team with a 4 goal or more deficit may choose to take indirect free position at the center of the field in lieu of a draw. The opposing center must be 4 meters away at a 45° angle. The center with the ball may not score without first passing the ball.

Fouls:  There are two types of fouls: Major and Minor. Major fouls usually pertain to offenses that are potentially dangerous. Minor fouls are less series such as checking an empty stick, covering a ground ball with a stick, or guarding the ball with ones feet.  A Major Foul committed outside the 8-meter arc:  For a major foul by a defender, the free position will be at the spot of the most recent foul.  All players are cleared from the penalty lane.  A Major Foul committed inside the 8-meter arc:  All players’ bodies and sticks must be cleared from the arc and penalty lane.  Player with the ball may have her crosse in the arc, her feet must be behind the arc.  The goalkeeper may return to the goal circle as long as they did not commit the foul.  All players must take the shortest route out.  The player who was fouled will move to a hash mark on the 8-meter nearest to the spot of the foul.  The player who fouled moves to the 12 meter fan directly behind the player taking the free position.  For Minor Fouls:  The player committing the foul must move 4 meters behind the player getting the free position.

Penalties for women's lacrosse are assessed with the following cards:

Critical Scoring Area: An area 15 meters in front of and to each side of the goal and nine meters behind the goal. An eight-meter arc and 12 meter fan are marked in the area.

Crosse (Stick): The equipment used to throw, catch, check and carry the ball.

Crosse Checking: Stick to stick contact consisting of a series of controlled taps in an attempt to dislodge the ball from the crosse.

Draw: A technique to start or resume play by which a ball is placed in between the sticks of two standing players and drawn up and away.

Eight-Meter Arc: A semi-circular area in front of the goal used for the administration of major fouls. A defender may not remain in this area for more than three seconds unless she is within a stick's length of her opponent.

Free Position: An opportunity awarded to the offense when a major or minor foul is committed by the defense. All players must move four meters away from the player with the ball. When the whistle sounds to resume play, the player may run, pass or shoot the ball.

Free Space To Goal: A cone-shaped path extending from each side of the goal circle to the attack player with the ball. A defense player may not, for safety reasons, stand alone in this area without closely marking an opponent.

Goal Circle: The circle around the goal with a radius of 2.6 meters (8.5 feet). No player's stick or body may “break” the cylinder of the goal circle.

Indirect Free Position: An opportunity awarded to the offense when a minor foul is committed by the defense inside the 12 meter fan. When the whistle sounds to resume play, the player may run or pass, but may not shoot until a defender or one of her teammates has played the ball.

Marking: Being within a stick's length of an opponent.

Penalty Lane: The path to the goal that is cleared when a free position is awarded to the attacking team.

Scoring Play: A continuous effort by the attacking team to move the ball toward the goal and to complete a shot on goal.

Stand on Whistle: All players must stop and stand still when the whistle blows to stop play. A player moving after the whistle can be called for a foul and change of possession awarded.

Sphere: An imaginary area, approximately 18 cm (seven inches) which surrounds a player's head. No stick checks toward the head are allowed to break the sphere.

Substitution:  Is unlimited and may occur at any time. Substitutions must check in at the scorer/timer table and enter the field through the team substitution area. The player coming off the field must completely exit the field before her substitute may run onto the field.

12 Meter Fan: A semi-circle in front of the goal used for the administration of minor fouls.

Uslacrosse.org is a great resource to find helpful information.  The youth handbook can be found at the following link and you will receive one from US Lacrosse each year.